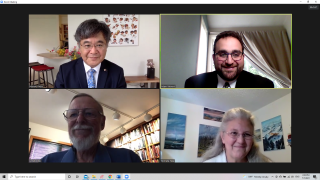 Mr. Aniya mentioned that the former Head of Office, Mr. Sato, visited Juneau several times to exchange opinions with state legislators and held movie screening events. Since movies are a good medium to spread Japanese culture through the feelings of the Japanese people, Consul Aniya would like to seize a good opportunity after COVID-19 and carry out film screening events. Mr. Aniya stated that he heard the City of Juneau and Nishiokoppe Village have been conducting student exchanges and dispatching English teachers for more than 25 years, and that, since the "Japan-Alaska Sister Cities Forum" established this year aims to promote student exchanges, he would like the City of Juneau to actively participate in the Forum, and future Forum events.

In addition, Mr. Weinert said the Consular Office of Japan in Anchorage is making preparations for emergency situations by identifying which government departments to contact in the event of an emergency, and he would like to start such a dialogue with those concerned in the City of Juneau.

Deputy Mayor Mr. Jones expressed his condolences for the victims of the Atami landslide, and mentioned that similar disasters have occurred in Sitka and Haines in southeast Alaska, so he sympathizes with the victims and their relatives. He said that he is also a fan of Japanese movies and dramas and often watches them. Mr. Jones also said OEM (Office of Emergency Management) officials in Juneau can be contacted through the City Manager’s office.

Ms. Hale said that her stepson had experience teaching English in Japan, and felt that civic exchange would provide great opportunities for young people. She said tourist cruise ships visiting Juneau were canceled last year due to COVID-19, however, she is expecting Japanese tourists to visit this year, because it recently became possible to resume the cruise ship business.