Online exchanged of views with Mr. Sean Parnell, Chancellor of the University of Alaska Anchorage 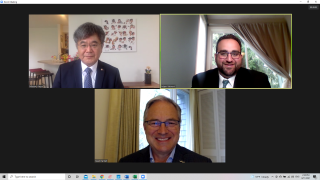 Mr. Aniya congratulated Mr. Parnell on his recent assumption as the University of Alaska Anchorage’s (UAA) new Chancellor, and thanked him for the Montgomery Dixon Center for Japanese Language and Culture’s  educational activities and UAA’s support for the JET Program. Mr. Aniya also explained the activities made by the Consular Office so far, and the plans for upcoming events such as the Arctic Symposium.  He also stated that  through these events he would like to raise the interest of international issues to the young people in Japan and Alaska.

Mr. Parnell said that his younger brother was a participant in the JET Program and his two-year life in Japan was a life-changing experience. Mr. Parnell also said UAA students are involved in a wide array of activities, and that there are UAA students who are interested in international issues. Mr. Parnell said he would like to cooperate with the Consular Office in various aspects in the future, including attending the Arctic Symposium.