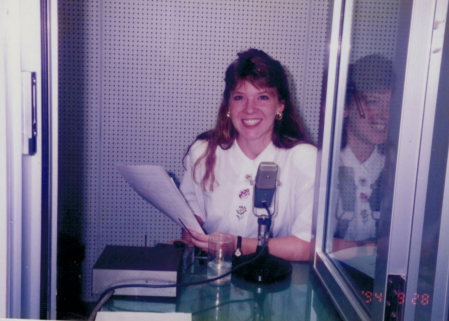 After earning a Master’s degree at the Center for Japanese Studies at the University of Michigan - Ann Arbor, Caryn returned to Alaska to teach. She completed the UAA Teacher’s Certification Program and has taught Japanese at Chugiak High School and the University of Alaska - Anchorage. She continues to privately tutor students and her children.

When did you begin studying and teaching Japanese?

I began taking Japanese language classes as a freshman at the University of Redlands in California. I had taken three and a half years of Spanish at Bartlett High School, but Japan was rising to prominence in the world news and sparked my interest.

During my junior year, I earned a scholarship for a study abroad program from the Japan Business Association in Southern California. I spent a year studying at Waseda University in Tokyo. While pursuing my studies at Waseda, I found opportunities to teach English, and work on English Conversation software.

Describe your experience as a CIR.

I was a CIR in Hiroshima, where I primarily did translation and interpretation for the city government. I was an interpreting liaison for city interns from other countries. I translated letters from the Mayor of Hiroshima to Presidents and Prime Ministers. Interpreting at the Hiroshima Peace Memorial Museum was a particularly moving experience, and I encourage anyone who is visiting Hiroshima to go to the Peace Museum.
I hosted a weekly radio program called “What’s Happening Hiroshima” with a Canadian and another American CIR. We gave updates on community events and activities, as well as cross-cultural information.

I participated in an International Exchange Lounge twice a month, which provided Hiroshima citizens the opportunity to interact with foreigners. I provided English proofreading and student consulting services. People could also come in to discuss various topics of interest in English or in Japanese.

I learned a lot about the world from Japan’s perspective through JET. I gave a presentation to a crowd of over 800 about the “volunteer spirit”. I talked about the importance of reaching out and getting involved in your community.

Newsletter advertisement for Hiroshima CIRs in the International Exchange Lounge

What made Japan stand out from the other foreign countries in which you lived?

The hospitality of the Japanese people really stands out to me. One day I was lost and someone took the time to give me directions to Tokyo station. Another time I lost my wallet and the person who found it made the effort to return the wallet to me. I am very grateful for the kindness I was shown when I was in Japan.

What are the differences between teaching Japanese students and teaching American students?

With American students, I love talking about Japan and sharing Japanese culture. With Japanese students, I enjoy teaching English and forming new friendships. Most of my experiences teaching in America have been in classrooms, though I have often taught Japanese privately. The one-on-one sessions allow me greater focus on the student and individual achievement. Both experiences are very rewarding in their own ways.