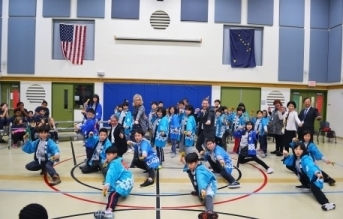 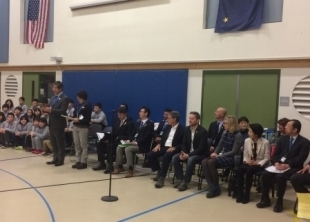 A total of 32 students from Chitose visited Anchorage for a week as part of a cultural exchange program. Sand Lake Elementary School students will in turn visit Chitose in June 2018.

Mayor Berkowitz emphasized the relationship between Anchorage and Chitose, noting that next year will be the 50th anniversary of the sister cities. Mayor Berkowitz also stated that these students represent the new face of the partnership. Alaska State House Member Jason Grenn mentioned that although it is cold outside, Alaskans have a warm heart, and that he hopes Alaskans’ friendship and kindness helped ease the fear the students might have about traveling so far.

ASD Superintendent Deena Bishop and Sand Lake Elementary Principal Linson Thompson both thanked Chitose Elementary Schools for their continued support of the exchange program and hoped it would continue, as well as emphasized the importance of the Japanese Immersion Program at Sand Lake Elementary.

The celebration also included a reading from the United Nations Universal Declaration of Human Rights, as well as a performance by the Sand Lake Elementary choir. The ceremony concluded with a dance performance of “Yosakoi Soran”, a festive dance performed in Hokkaido, by the Chitose exchange students.