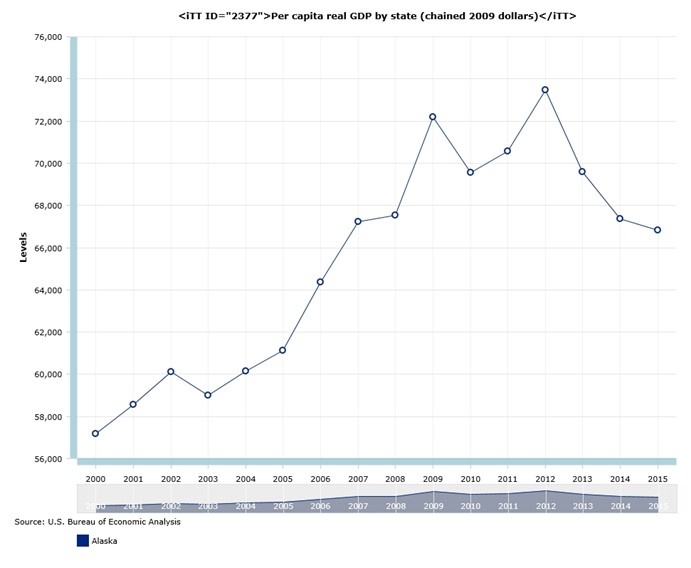 Alaska’s lower GDP per capita income is also lower than the national average because of the high commodity prices. As Alaska has almost no local manufacturing or farming production most of its goods must be shipped in, resulting in higher average commodity prices for most items. Anchorage, which pays the lowest overall consumer prices in Alaska, still has a Cost of Living Index rating at 132% of the national average.

Alaska has had no income or state taxes since 1982, after the government abolished income taxes because tax revenues from the Trans-Alaska Pipeline (completed in 1977) could fully fund the government. Since then, oil and gas production has provided almost 90% of Alaska’s tax revenues. However, since the 2012 crash in oil prices the State of Alaska has had an almost 3 billion dollar deficit and rapidly dwindling cash reserves. While no actual proposals have been made, a state wide income or sales tax are being considered. Many local municipalities already have sales or property taxes, so a statewide tax would be in addition to already existing local taxes. In order to help cover the deficit, Governor Bill Walker vetoed half of the Permanent Fund Dividend checks given yearly to Alaskan citizens. The Alaska State Permanent fund is a constitutionally established sovereign fund that was created in 1976 wherein which roughly 11% of oil tax revenue is managed and invested by the Alaska State Permanent Fund Corporation for the benefit of Alaskan citizens. Every year, Alaska state residents are given a percentage of the profits of the fund, a check which has averaged around $1,000 a year recently. With over 54 billion dollars in the constitutionally protected Permanent Fund, Alaskan politicians are hotly debating whether to use the fund to cover the state government budget shortfall. 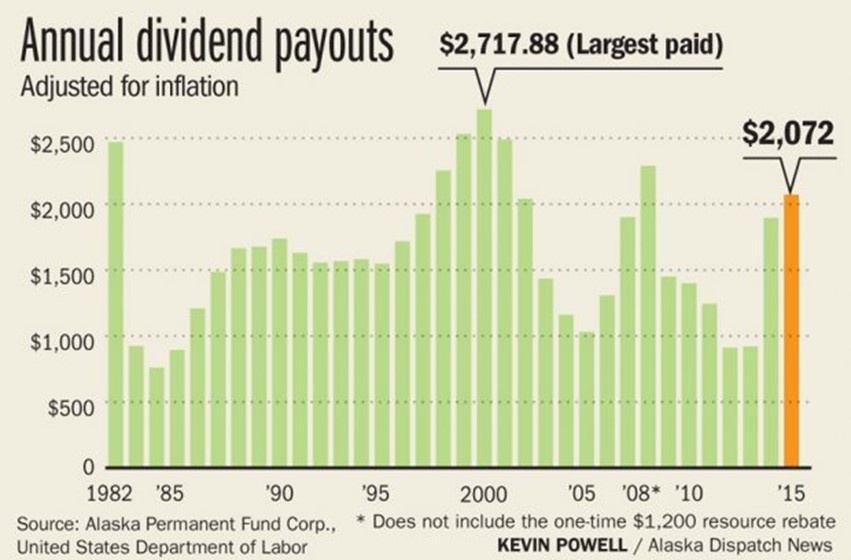 Governor Walker’s preferred answer to the budget crisis, other than cutting spending and using permanent fund dividend checks to pay for State operations, is the creation of an Alaska Liquid Natural Gas line, a project which has been debated since the 1980’s. A gas pipeline would increase tax revenues for the state, which would help with solving the budget crisis in the future, but building a pipeline would take years to complete. And while the three major oil companies who own the natural gas leases, Conoco Phillips, BP, and Exxon have been working on the project since 2012, after the 2014 crash in oil prices they have all been hesitant to work on the project as global prices for natural gas have decreased. In 2016, Governor Walker officially announced that the State would take over the project and lead the creation of a natural gas pipeline.