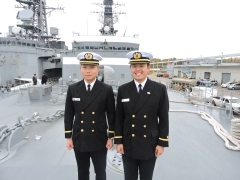 During the Japan Maritime Self Defense Force's visit to Anchorage, our office interviewed two newly commissioned officers who recently graduated from the Japan Maritime Self-Defense Force Officer Candidate School. Officer Trainee Shinichi Asano from Kyoto has served in the JMSDF for 5 years. Officer Trainee Yusuke Uchida from Tokyo has served in the JMSDF for a year and a half. We asked them about a typical day on the overseas training cruise and the most rewarding aspect of serving in the JMSDF.

Q: What is your typical schedule when visiting a port for the first time?

Asano & Uchida: We visit significant historical sites in the city, such as Japanese immigrant memorial sites. While in Anchorage, we will visit Fort Richardson National Cemetery to pay respects to the Japanese soldiers who were on Attu Island during World War II. We visit any also nearby naval bases and marine biology centers and meet with local military personnel.

Q: How do you think your work is beneficial to the people of Japan and the countries you are visiting?

Asano: One of the goals of the JMSDF is to ensure the peace and safety of the Japanese people. We are dispatched to secure sea lines and protect the nation from any threats.

Uchida: Visiting many countries gives us the opportunity to teach people about Japan. Many people do not know much about Japan or have never interacted with a Japanese person. These people can learn about Japan by talking to us.

Q: What is the most rewarding aspect of serving in the JMSDF?

Asano: My grandfather served in the Imperial Japanese Navy, which influenced my decision to join the JMSDF. I think the most rewarding part is how the JMSDF is important to protecting the people of Japan. Because Japan is an island nation, the JMSDF plays a significant role in national security.

Uchida: I agree, and I also enjoy interacting with people abroad and representing Japan.

Q: What are your first impressions of Alaska and the U.S. as a whole?

Asano: It’s actually colder than I expected! Anchorage is our last stop in the United States. Previously we stopped in warmer places such as San Diego, so the climate here is very different.

Uchida: My family hosted an exchange student from Alaska. Everything matches the descriptions: clear air, beautiful surrounding nature. I think the people here have a lot of positive energy.

Q: What is your hope for the future of Japan-U.S. relations?

Asano: My hope is for Japan and the United States to develop better relations and for both nations to prosper. Not just in the military and economy, but between the people as well.

Uchida: I hope Japan and the United States will continue to work together to ensure world peace and security. I would like Japan to take a more active role in defense, and I hope to be part of that through the JMSDF.