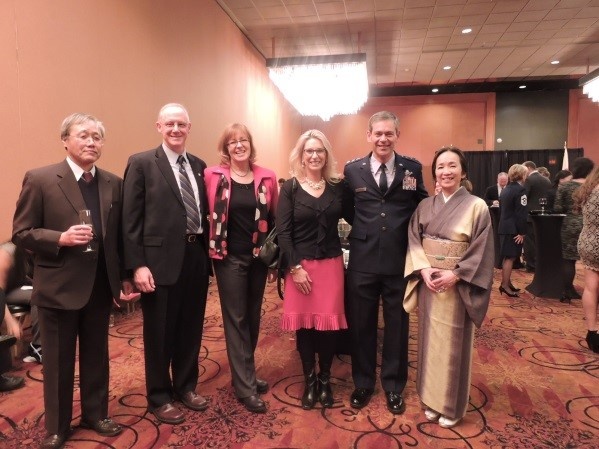 The reception began with the national anthems of both the United States of America and Japan, performed by Ms. Lisa Hawkins. In his speech, Consul Izakura stressed the important military, economic and cultural ties of the Japan-Alaska relationship. He said the ongoing military training in Alaska, which includes members of the Japan Self-Defense Forces, is important for both countries. Consul Izakura also highlighted the ongoing public safety efforts of the Anchorage's Police Department, as well as the State of Alaska's long-term economic partnerships with Japan that sees $1 billion of Alaska products exported to Japan every year. Lastly, Consul Izakura noted the many schools throughout the state that offer Japanese language courses, and offer thousands of students the opportunity to study Japanese culture and history.

Ms. Rachel Bylsma, Constituent Representative from the Office of Senator Dan Sullivan, offered Senator Sullivan's remarks to celebrate the 83rd birthday of His Majesty the Emperor Akihito and highlighted the bilateral cooperation between the United States and Japan.

Alaska Governor Bill Walker spoke about his recent trip to Japan to promote the state's vast natural resources and speak at an important LNG conference in Tokyo. Governor Walker said that Japan has been Alaska's most important trade partner throughout the state's history and stated his wishes to see the state export more LNG to Japan in the near future through the Alaska LNG Project.

Anchorage Police Chief Chris Tolley spoke on the vast diversity of cultures in Anchorage and spoke of the importance of understanding different cultures. Chief Tolley also introduced several members of his senior staff that were in attendance.

Lt. General Kenneth Wilsbach also introduced several senior officers from the U.S. Army and U.S. Air Force who had each served part of their career at the U.S. military installations throughout Japan. The officers also shared their favorite part of living in Japan, most said they thoroughly enjoyed Japan's people, hospitality and cuisine.

Following the speeches, a group toast was led by the president of the Japan Alaska Association, Ms. Erika Ninoyu. The reception's guests were able to enjoy live music performances, Japanese food, watch short films about Japan and take home information about Japan and its prefectures.