Online exchange of views with the CEO of Explore Fairbanks, and the Tourism Sales Manager 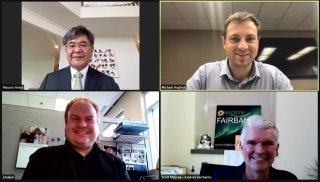 Mr. Aniya thanked Explore Fairbanks for submitting their excellent work "Nostalgia" to the "Japan-Alaska Friendship Video Campaign”. The video was about an Alaskan and a Japanese person who got together 25 years after their last meeting in Japan. Mr. Aniya said that his goal is to let as many young people as possible have such a ‘life-changing wonderful experience’. He stated that, this year, he would like to hold the "Photo + Essay Campaign" as well as the "Japan-Alaska Arctic Cooperation Online Symposium".

Mr. McCrea mentioned that he was happy that ExploreFairbanks’ video submission was appreciated, and he hopes that many Japanese people will visit Fairbanks in the wake of various Japan-Alaska sister city exchange activities. Regarding bilateral cooperation on Arctic issues, he stated that the International Arctic Research Institute of Fairbanks has done great research thanks to cooperation between the U.S. and Japan. Mr. Malen, who starred in Explore Fairbanks’ video submission, reiterated what he said in the video—which is that the Itadori (Gifu) - North Pole exchange program was a wonderful, life-changing experience for him.