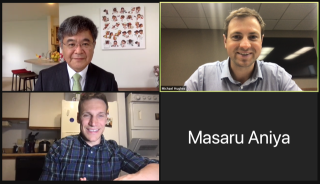 Mr. Aniya mentioned that since Mr. Dunbar visited Chitose City in 2019 to commemorate the 50th anniversary of the Anchorage-Chitose sister city relationship, and has also studied at Waseda University in Tokyo, he thinks Mr. Dunbar has a deep knowledge and understanding ofJapan. On the topic of sister cities, Mr. Aniya explained that the Consular Office held a "Friendship Video Campaign" last year, and that Professor Harada, from the municipality of Anchorage, submitted a wonderful work. Mr. Aniya also announced that the Consular Office is planning to hold a "Photo + Essay Campaign" this year, and he hopes it will be a popular event for many young people.

Mr. Dunbar mentioned that after visiting Chitose in 2019, he, together with Professor Harada and the rest of the Anchorage Delegation, visited Rikuzentakata City, where an ALT (Assistant Language Teacher) on the JET Program, Mr. Montgomery Dickson, tragically lost his life in the Great East Japan Earthquake. Mr. Dunbar noted that it was impressive to see infrastructure development and the scale of reconstruction in the disaster area, and that his visit to Japan was impressive in many ways. In addition, Mr. Dunbar expressed his strong interest in promoting the sister city relationship between Anchorage and Chitose, and his desire to cooperate in the future if and when an opportunity presents itself.