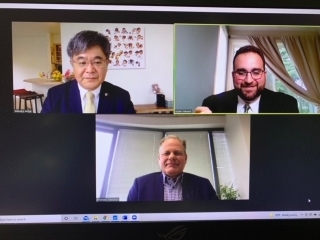 On June 23, Mr. Aniya and Mr. Weinert exchanged views online with the Mayor-elect of the Municipality of Anchorage, Mr. Dave Bronson.

Mr. Aniya congratulated Mr. Bronson on his successful election as the next Mayor of Anchorage, and mentioned that he hopes the new Mayor will tackle and solve various issues in Anchorage. Mr. Aniya stated that more than 300 Japanese live in Anchorage, and that, since 1969, Anchorage has been actively carrying out student exchanges, etc., under the sister city relationship with Chitose City for over 50 years.  Mr. Aniya asked for cooperation in promoting these exchanges.

Mayor-elect Mr. Bronson mentioned that, when he was working as a pilot for 30 years, there was a time that he traveled back and forth between Tokyo and Osaka, even twice a week. He is interested in promoting business relations with Japan. As to the Anchorage-Chitose sister city relationship, Mr. Bronson stated that he was looking forward to visiting Chitose City someday, and that human exchange through language education such as the JET Program and the Japanese Immersion Program is also important, so he would like to promote these as well.