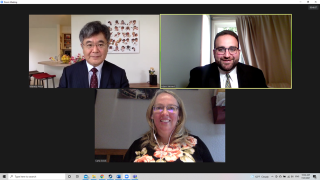 Ms. Swick said that the 40th anniversary event of the sister city relationship between Palmer and Saroma had to be postponed due to the influence of COVID-19, but she hopes that the event will be realized in 2022. “Palmer-Saroma Kai”, a non-profit organization which she serves as its President, usually engages in a variety of activities, and this year it will attend the Alaska State Fair Parade in August. She also said that some of her students have produced books for children, and many of them are books based on the experience of sister city activities, such as books on Japanese recycling activities.

Mr. Aniya mentioned that the Consular Office of Japan in Anchorage has conducted a video campaign under the "Japan-Alaska Sister City Forum" in cooperation with the people involved in Japan-Alaska sister cities, and that "The International Youth Conference" and a “Photo + Essay Campaign” are events being planned this year, and it would be greatly appreciated if the students of Palmer High School would participate in these events.  In response, Dr. Swick stated that she is interested in participating in sister city related events, so she would like to be informed when more details on both upcoming events are ready to be shared.