Attu children in Tacoma, Wash., following their release from Japan at the end of World War II. The girl in the hat touching the priest’s hand is Elizabeth Golodoff Kudrin, now one of two survivors of the internment. (Photo from Betty Bendixon, courtesy Rachel Mason)

In June 1942, the Japanese Imperial Army invaded the Aleutian Islands of Kiska and Attu. The Japanese Army took the Attuans who lived on the island hostage. While they initially had a friendly relationship, even allowing the Attuans to fish and hunt freely, 42 Attuans were forced on Japanese Navy boat and were taken to Otaru, Hokkaido during the winter. One of the Attuans died during the journey, and upon arriving in Otaru they were imprisoned in a house and forced to work in a nearby dolomite mine. Rachel Mason, PhD and Anthropologist for the National Park Service of Alaska, with the help of Dr. Hiroko Harada, Professor of Japan at the University of Alaska Anchorage, and Anchorage sister city Chitose, traveled to Otaru in  2015 to visit the house and research the lives of the Attuan held captive during WWII.

The Attuans initially survived in the house with the salmon and other food they were allowed to bring with them. However, food stocks began to run low and rations from the Japanese were not sufficient, so many of the Attuans began to starve. After about a year in the house, when almost half of the Attuans were put into a hospital for tuberculosis, the remaining half were moved into a Shinto shrine in Otaru. They also were allowed to move freely around Otaru, as they were too weak to be considered a threat and the Japanese Army did not want to use soldiers to guard them anymore. Fifteen of the Attuans died during the three years they were in imprisonment, either from tuberculosis or starvation. 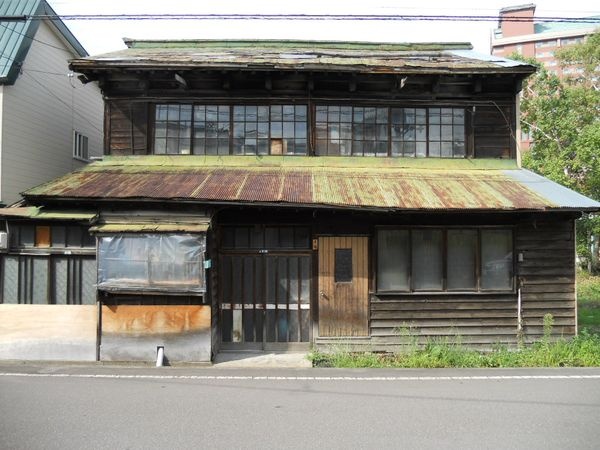 The building in Otaru, Japan, where the Attu prisoners were first housed upon arriving in Japan, seen shortly before its demolition this year. (Photo by Rachel Mason)

After the war ended in September 1945, the US military sent food aid to the 25 surviving Attuans in Otaru and then moved to Seattle, Washington. They lived there for a couple weeks for tuberculosis treatment. Nine of Attuans eventually stayed in Seattle, while the other 16 moved to Atka Island, an island east of Attu along the Aleutian chain. Unfortunately, because of the battles on Attu, the island was uninhabitable, so the Attuans could not return.

To this day there are only two remaining survivors, Nick Golodoff and Elizabath Golodoff. Both were children when they were in Otaru. Nick Golodoff recently wrote a book, “Attu Boy, a Young Alaskan’s WWII Memorial”, which is being translated into Japanese by Dr. Harada.

Rachel Mason (left) with members of the congregation of the Russian Orthodox Church of the Resurrection of the Lord, where Attu prisoners are said to have prayed following their release. (Photo courtesy Rachel Mason)

Full story of the Attuans and Ms. Mason's research:

What became of the places where Alaskans were held captive in WWII? A historian traveled to Japan to find out.

Ongoing project to restore audio recordings of the Attuan people: