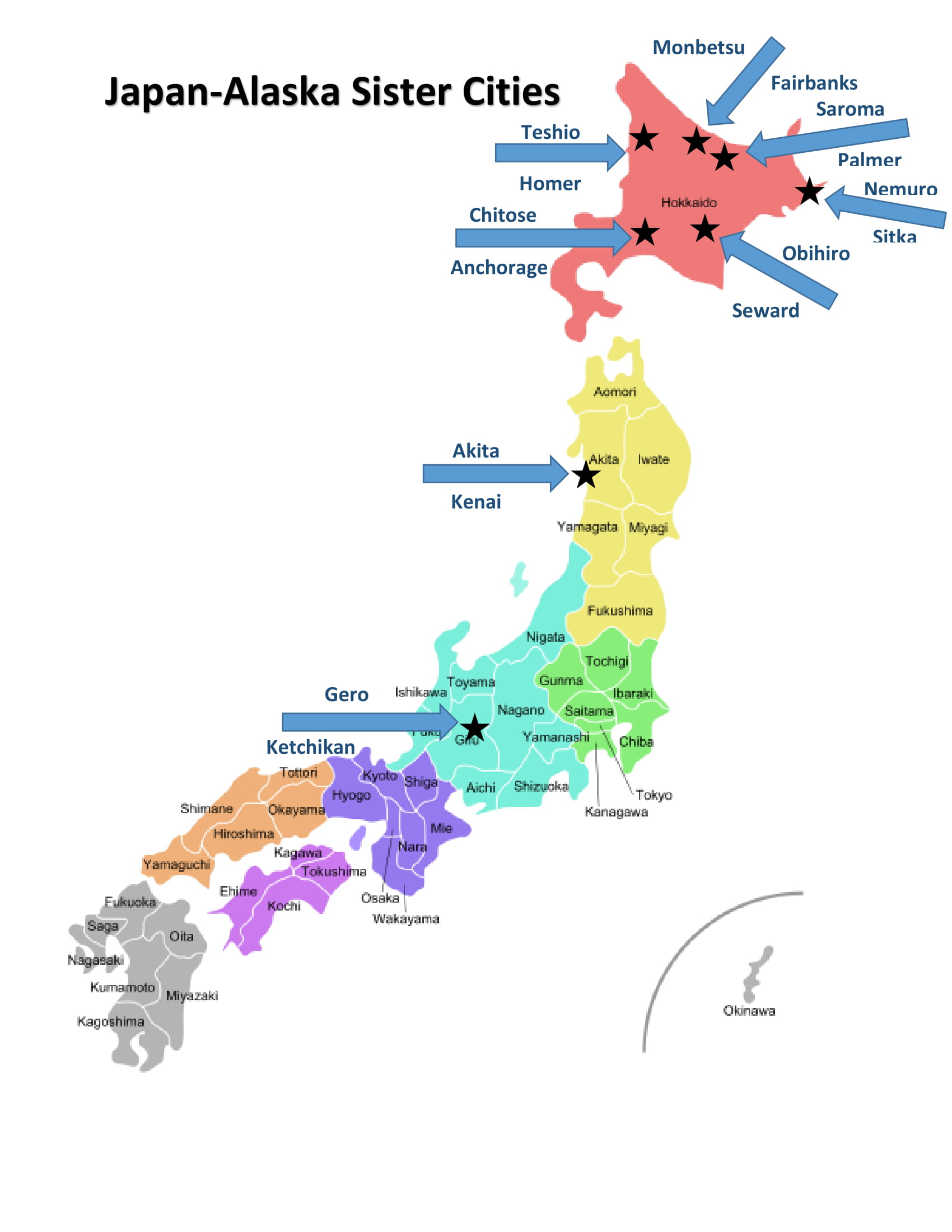 A sister city relationship is a long-term partnership between two communities in different countries. By forming partnerships, countries develop understanding and appreciation for each other’s unique cultures.

Sister city relationships are independently developed and maintained by volunteers with the support of local elected officials in their communities. Each sister city organization pursues activities important to both communities, including economic, educational, and cultural exchanges. While the heads of both local authorities must sign an official sister city agreement, the nature of the sister city relationship is not determined or bound by law.

Japan and Alaska have not only close political and economic relations, but also strong connections at the interpersonal level. For decades Alaskan and Japanese citizens have formed relationships through cultural and educational exchanges. Exchanges between Japan and Alaska, both past and present, contribute to the peace and prosperity of both communities.

Chitose became Anchorage’s first sister city in 1969. Located in Japan’s northernmost island of Hokkaido, Chitose is well-known for its outdoor activities, such as baseball, fishing, and skiing. In 1983, a boys’ baseball exchange program started, in which Anchorage and Chitose residents visit each other every four years.

In 1994, Sand Lake Elementary’s Japanese Immersion Program began a student exchange program with Chitose Elementary School. The Chitose-Anchorage Friendship Association in Japan has been a strong support of the exchange program. Students and chaperones from each school travel to their respective sister city in alternating years.

In August 2014, Anchorage Mayor Dan Sullivan and the Anchorage Sister Cities Commission welcomed Mayor Kotaro Yamaguchi of Chitose along with 29 additional guests to celebrate the 45th Anniversary of the Anchorage-Chitose sister city relationship.

Teshio became Homer’s sister city in 1984. Professor Junzo Hasegawa made annual visits to Homer with his leadership camp. Professor Hasegawa recommended Teshio to Steve Yoshida, who became chair of the Homer-Teshio Sister City Association, as a sister city for Homer because of its similar climate and culture.

On March 11th, 2011, the day of the Tohoku earthquake and tsunami, Homer Mayor James C. Hornaday wrote a letter to Teshio Mayor Hiroshitaka Asara and the Teshio City Council to express concern and sympathy for everyone affected by the disasters in Japan.

After 30 years of friendship in 2014, Teshio gave kimono and happi coats as gifts to the Homer City Council.

The Kenai-Akita relationship dates back to 1989, when Japanese born Yasuko Lehtinen began teaching Japanese language at Soldotna High School. Feeling homesick, she met with the Consular Office of Japan in Anchorage and worked with the University of Alaska Anchorage and the University of Alaska Fairbanks towards establishing a sister city relationship. After Akita expressed interest in a sister city in Alaska, Lehtinen accompanied the Kenai Peninsula delegation to Akita.

Kenai and Akita officially became sister cities in 1992. Since then, student and professional exchanges involving Kenai and Akita residents occur every two years.

In August 1977, Edward Holmes of Palmer made contact with Mutsuhiro Ishiguro of Saroma via ham radio. After years of frequent communication, Holmes visited Saroma in 1980, which led to Palmer and Saroma becoming sister cities.

Since becoming sister cities, Palmer and Saroma have engaged in short-term and long-term student exchanges and language teacher exchanges. Official delegations from each sister city have also visited each other. In July 2015, 21 Palmer-Saroma Sister City delegates from Saroma visited Palmer to celebrate the 35th anniversary of the sister city relationship.

Seward and Obihiro’s friendship dates back to 1968. In 1973, a sister city relationship was established when two Seward High School students went to Obihiro as exchange students. The most recent Seward-Obihiro student exchange occurred in August 2015.

In addition to student exchanges, Seward and Obihiro have also exchanged works of art. In 2013, Seward artists presented a mural entitled “Friendship Across Water” as a gift to Obihiro. The next year, five artists from Obihiro went to Seward to present a mural gift to the city.

Seward has also had a Sister-Port relationship with Kushiro, Japan in Hokkaido since 1982.

On May 1, 2015, Wasilla Mayor Bert Cottle hosted a ceremony establishing a sister city relationship between Wasilla and Uchiko. Uchiko Town Councilman Toshio Saino and students from Japan attended the ceremony. The ceremony was filmed for a documentary about Iditarod pioneer Jujiro Wada called “The Samurai Musher”.

For the past 21 years, Wasilla High School has had an exchange program with Takefu Higashi High School in Echizen, Fukui prefecture. Both schools alternate between sending and hosting exchange students each year.

was established in 1970. The mayor appoints Anchorage citizens to the Commission as representatives of various diverse communities. The Commission’s goal is to promote mutual respect and goodwill between Anchorage and cities in foreign nations through cultural and educational exchanges.

The Sister Cities Committee of the City and Bureau of Juneau

was established in 2009. The Committee is composed of five members who advise and assist the Assembly with promoting international relations. The Committee encourages participation from the general public in its meetings and activities.

The Council of Local Authorities on International Relations (CLAIR)

was founded in 1956 by President Dwight D. Eisenhower as a national membership organization for individual sister cities, counties, and states across the United States.